Mike Badger and the Shady Trio

Formed in the Summer of 2010, Now playing Live around the North Westand UK (Myspace – Facebook – Twitter) You can view a video for ‘Jump Back Down Up Around’ – HERE 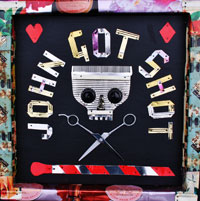 Lucky 13 by the Shady Trio is available in the store

Mike Badger & The Shady Trio – Another Christmas Carol ‘Musically bright, poppy and immediate with nods to both Merseybeat and gritty, Eddie Cochran-style rock’n’roll, ‘Another Christmas Carol’ is a wholly straight-up account of the modern day festive season. Mixing a healthy dose of Scouse realism (“it gets earlier each year/ you argue with your missus and forget your festive cheer”) with wit, humour and optimism’ – Whispern’ and Hollerin’ December 2011 (Available on iTunes and as a limited edition vinly look CD)

The Shady Trio are:

The Shady Trio EP is now sold out, you can read a review of the EP……. HERE

Sometimes you do have to go for the attention grabbing opener, and when an EP is as good as this I don’t feel too bad in using it. Whilst perhaps not a household name, Mike Badger has a pretty solid pedigree, founder member of indie heroes The La’s. Now I have your attention.
This is not however a rehash of a legacy, a well formed musician in his own right, Mike Badger & The Shady Trio is a collection of roots-rock with little in common with his indie heritage, other than an ear for a catchy melody. Opener I Love My Love is a classic Mersey Beat shuffle, short and sweet, a trick used more than once on the EP to great effect. The instantly loveable Ten Commandments Of Rock feels like Rocket From The Crypt covering Eddie Cochran and is quite simply fantastic. Imagine Charlton Heston standing on the mount, with a quiff and a leather jacket decreeing that ‘Thou shalt not covet another man’s guitar’, that is how much fun this song is. Shake It Up is an Elvis inspired rockabilly stomp, coming in at just a minute and half it is another highlight of the EP. Reminiscent of ‘The Ballad Of John & Yoko’, For Who I Am expresses the desire to find someone to ‘recognise me for who I am’, whatever happens, it will all be OK if you have that one special person close to you. A simple sentiment, delivered with all the feeling and none of the usual schmaltz the X-Factor generation would force feed you. Ending with the beautifully understated Everybody’s Drinking a track imbued with a real heartfelt sense of remorse and allowing the true quality of the musicianship and song writing to shine through. Coming in at just under 15 minutes for the whole EP, Mike Badger & The Shady Trio is a joy from start to finish, hopefully this is just a taster of what is to come because it certainly leaves you wanting more.

Rounding off the evening was veteran rockabilly artist Mike Badger. He was backed by The Shady Trio, which featured members of The Loose Moose String Band. Wearing a black shirt and dark rimmed glasses, Mike charged to the stage with his acoustic and held the crowd’s attention by playing a powerful set. By now it was a full house. The trio of electric guitar, double bass and shuffling beats recreated the classic sound of fifties rockabilly and provided the perfect backdrop to Badgers vision. Needless to say Mike and the boys brought the house down, ending the night on a high note.